Schönhausen Choir on Tour in England

Schönhausen Choir on Tour in England

To mark 40 years of twinning between Krefeld and Leicester the Schönhausen choir gave a concert in Leicester. This was a fitting start to this celebratory year. An audience of some 200 people enjoyed the a-cappella concert of European church music from five centuries. Also present was the Mayor of Leicester, Manjula Sood and other representatives from the town of Leicester.

A reception was held in the Leicester town hall for the Schönhausen Choir after the concert. Manjula Sood, who was born in India and is the first female Asian to hold the post of Mayor in Great Britain, said how much she had enjoyed the concert and how pleased she was that the members of the choir were the first official ambassadors to Leicester in this celebratory year.

Gabriele Schulten, the chair of the choir, gave official greetings from Gregor Kathstede the Mayor of Krefeld, and presented gifts from both the town of Krefeld and the choir. She thanked the town of Leicester for the warm welcome and for attending the concert. She was particularly thrilled with the newly formed friendship between the Leicester Bach Choir and the Schönhausen Choir. The members of the Bach Choir, particularly Nicki Little, secretary of the Bach Choir, had made the German choir feel very welcome and had looked after them splendidly over the two days. The visitors from Krefeld and their hosts from Leicester were then treated to a buffet in the town hall and over good food and drink the two groups could mingle and talk. The idea for the English choir to visit Krefeld was given a warm seal of approval - perhaps even for there being the opportunity of the two choirs giving a concert together.

The next tour stop was Norwich on the east coast of England. Here the choir was given the honour of being able to sing Evensong in one of the oldest and biggest English cathedrals. Evensong takes place every day and the liturgy is 900 years old and can be compared to Vespers held in a Catholic cathedral. Usually it is held by the cathedral’s own choir. So in keeping with the tradition of the service, the German choir had to learn everything carefully; the service liturgy, the processional part of the service for entering and leaving the choir stalls, and the music. The service was all in English of course and the arrangement of standing in the choir stalls was a completely new experience for the choir. But Joachim Neugart, the conductor of the Schönhausen Choir, had prepared the choir excellently for the task ahead and everything ran very smoothly. 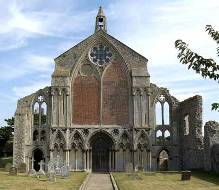 On Friday, on the way to the next venue, the choir was able to spend the day relaxing at Blickling Hall. The stately home with its beautiful grounds looked very impressive in the lovely spring sunshine. The choir’s next concert took place in Binham Priory an old, newly renovated building, dating back to the Middle Ages. The 11th century church building, standing in the middle of the East Anglian countryside, is part of the original church structure belonging to a monastery. Now of course only the ruins of the monastery itself remain. It was in this church with its wonderful acoustics, that the choir gave their a-cappella concert that evening. They sang works by English and German composers.

After the concert and over a glass of wine, there was opportunity for the choir members and visitors to the concert to introduce themselves to each other. The visitors had known and recognised many pieces of the music they had heard and had been interested in differences in interpretation and presentation of the pieces, particularly in those by English composers like Bob Chilcott and William Walton.

A boat trip along the Norfolk Broads brought the choir’s tour to a close. The following day they returned to Germany by coach and ship.